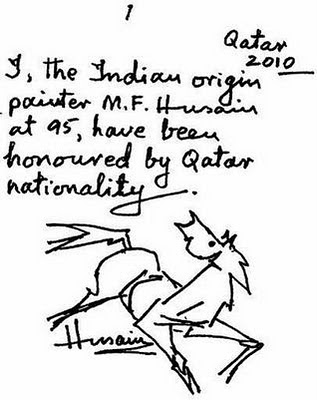 N. RAM
------
M.F. Husain, India’s greatest and most celebrated artist, has been conferred Qatar nationality - something that is very rarely given. The artist gave me this news from Dubai early Wednesday morning by reading out the few lines he had written on a black-and-white line drawing that he released to The Hindu.

“Honoured by Qatar nationality” but deeply saddened by his enforced exile and the need now to give up the citizenship of the land of his birth, which he has lovingly and secularly celebrated in his art covering a period of over seven decades. India does not allow dual citizenship, even though it has instituted the category of the ‘Overseas Indian Citizen.’ Mr. Husain will no doubt seek to acquire OIC status after completing the due procedures.

It is important to note that Mr. Husain did not apply for Qatar nationality and that it was conferred upon him at the instance of the modernising emirate’s ruling family.

Since 2006, when the Hindutva hate campaign against him escalated, Mr. Husain has been living in Dubai, spending his summers in London. He travels freely except to India, where he faces legal harassment and physical threats, with the system impotent and not committed to enabling his return. Though the Supreme Court has intervened on the right side, it was too little, too late. The Congress-led government, it is clear, has done no better than the preceding BJP-led governments in protecting Mr. Husain’s freedom of creativity and peace of mind.

Almost 95, the artist works a long day, producing large canvasses and life-size glass sculptures. Never has he been as commercially successful as he is today. His work now is mostly towards two large projects, the history of Indian civilisation and the history of Arab civilisation. The latter was commissioned by Qatar’s powerful first lady – Sheikha Mozah bint Nasser al Missned, wife of the emirate’s ruler, Sheikh Hamad bin Khalifa Al Thani. The works will be housed in a separate museum in Doha.

While being a rare honour, Mr. Husain’s impending change of nationality brings to a close one of the sorriest chapters in independent India’s secular history. Mr. Husain’s time of troubles began in 1996, after a Hindi monthly published an inflammatory article on his paintings of Hindu deities done in the 1970s. This led to a slew of criminal cases, filed in far-flung places, which alleged in the main that the artist had hurt the feelings of Hindus through his paintings. Mr. Husain estimates that there are 900 cases against him in various courts of India. He has been harassed by fanatical mobs. Exhibitions of his work have been vandalised. All this has created a fear of exhibiting his work in India.

I have personally accompanied Mr. Husain to court proceedings in Indore and have first-hand experience of the harassment and terror he faced from bigoted mobs. I received him in Mumbai on his return from the first of his temporary exiles and saw what insecurity and uncertainty this creative genius had to endure in rising India. It is ironical that a country whose religious art often portrays nudity and even overt sexuality, as in the case of the Khajuraho sculptures and the murals and frescoes of south Indian temples, has grown so intolerant as to drive into permanent exile its most famous artist.

I know no one more genuinely and deeply committed to the composite, multi-religious, and secular values of Indian civilisation than M. F. Husain. He breathes the spirit of modernity, progress, and tolerance. The whole narrative of what forced him into exile, including the shameful failure of the executive and the legal system to enable his safe return, revolves round the issues of freedom of expression and creativity and what secular nationhood is all about.

The conferment of Qatar nationality is an honour to Mr. Husain, to his artistic genius, and to the India-rooted civilisational values he represents. Nevertheless, it is a sad day for India.
Posted by Ek ziddi dhun at 6:05 PM

Email ThisBlogThis!Share to TwitterShare to FacebookShare to Pinterest
Labels: हुसेन

Come on dear ones ! Hussain is an artist--a very-very rich and successful artist who could have easily arranged for his safety here and no one was baying for his blood here. Itz STYLE .....a mere excuse to remain in NEWS which fuels the price of his paintings .
Don't waist your tears 'cos they are precious like pearls !

@Dhiresh can I talk to u on phone?
send me the no. on my email